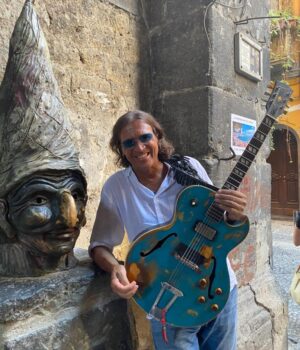 The Neapolitan guitarist and composer Antonio Onorato has had an outstanding 30-year career in the world of music. He is one of the few Italians to have held his own concert at the Blue Note in New York, the historic temple of international Jazz.

His experience also includes world music, with the publication of several albums contaminated by various world cultures, and symphonic-orchestral music, with several works written for symphony orchestra.
An eclectic musician, he ranges from jazz-rock to world music and composition for orchestra. A researcher in ethnomusicology, his research is based on the fusion of the harmonic-melodic stylistic elements of the Neapolitan music with Afro-American, Middle Eastern and Brazilian one, which have led him to identify a completely personal musical language. As an ambassador of Italian culture abroad, he has taken his “Italian” music all over the world, playing in Chile, Brazil, the United States, Mexico, Angola, Uganda, Morocco, Tunisia, Iraq, Turkey, England, Denmark, Switzerland, Albania and Slovenia.

Among the stages that have contributed substantially to his artistic and human growth there are concerts in America, where he has established artistic contacts with some Native American populations (Lakota), for whom he has always had a great passion, following their principles and worldview. In 2002 he went to Baghdad with a fearless delegation of Italian artists to protest against the second Gulf War, holding two concerts for peace in Baghdad and Baqubah.

About thirty albums have been published with various record labels. In 2005, he was the director of the publishing series ‘Noteinedite‘ for the Sigma publishing house. A book about his life has recently come out: ‘Antonio Onorato … jazz e oltre‘ (Antonio Onorato … jazz and beyond) (Rogiosi publisher). Among his albums, there are some of contamination with African culture: “The soul breath” and “Quatro linguas uma alma” with the participation of Angolan singer Dodo Miranda; with the culture of Native Americans: “South winds“, “Emmanuel” with the participation of Cheyenne poet Lance Henson and Apache musician Danny Many Horses, “Native Angels” with the participation of Hopi singer-percussionist Bo Koinva; with Brazilian culture with two albums, “Un grande abbraccio“ and “From Napoli to Belo Horizonte“, made with the great Brazilian guitarist-composer Toninho Horta.

In 2010 he celebrates 20 years of recording career and for the occasion his record label pays homage to him with a Greatest Hits.

At a very young age, he attended lessons with the great jazz guitarist Eddy Palermo and numerous workshops held by world famous guitarists such as Jim Hall, Mick Goodrick, Pat Metheny, John Abercrombie and John Scofield, who told him “I would have liked to play the guitar when I was twenty like you play it“. Today, he gives workshops on improvisation techniques himself.

Among his various guitars, he also plays a very special instrument, the Yamaha G10, a model of synth guitar that he himself renamed breath guitar. It is characterised by the fact that the strength, intensity and dynamics are managed through the emission of the musician’s breath thanks to a breath controller (a mouthpiece similar to that of a wind instrument) and not by the usual brush stroke or arpeggio.

This will close in 30 seconds

We use cookies on our website to give you the most relevant experience by remembering your preferences and repeat visits. By clicking “Accept”, you consent to the use of ALL the cookies.
Cookie settingsACCEPT
Manage consent

This website uses cookies to improve your experience while you navigate through the website. Out of these, the cookies that are categorized as necessary are stored on your browser as they are essential for the working of basic functionalities of the website. We also use third-party cookies that help us analyze and understand how you use this website. These cookies will be stored in your browser only with your consent. You also have the option to opt-out of these cookies. But opting out of some of these cookies may affect your browsing experience.
Necessary Always Enabled

Performance cookies are used to understand and analyze the key performance indexes of the website which helps in delivering a better user experience for the visitors.

Analytical cookies are used to understand how visitors interact with the website. These cookies help provide information on metrics the number of visitors, bounce rate, traffic source, etc.

Advertisement cookies are used to provide visitors with relevant ads and marketing campaigns. These cookies track visitors across websites and collect information to provide customized ads.

Other uncategorized cookies are those that are being analyzed and have not been classified into a category as yet.